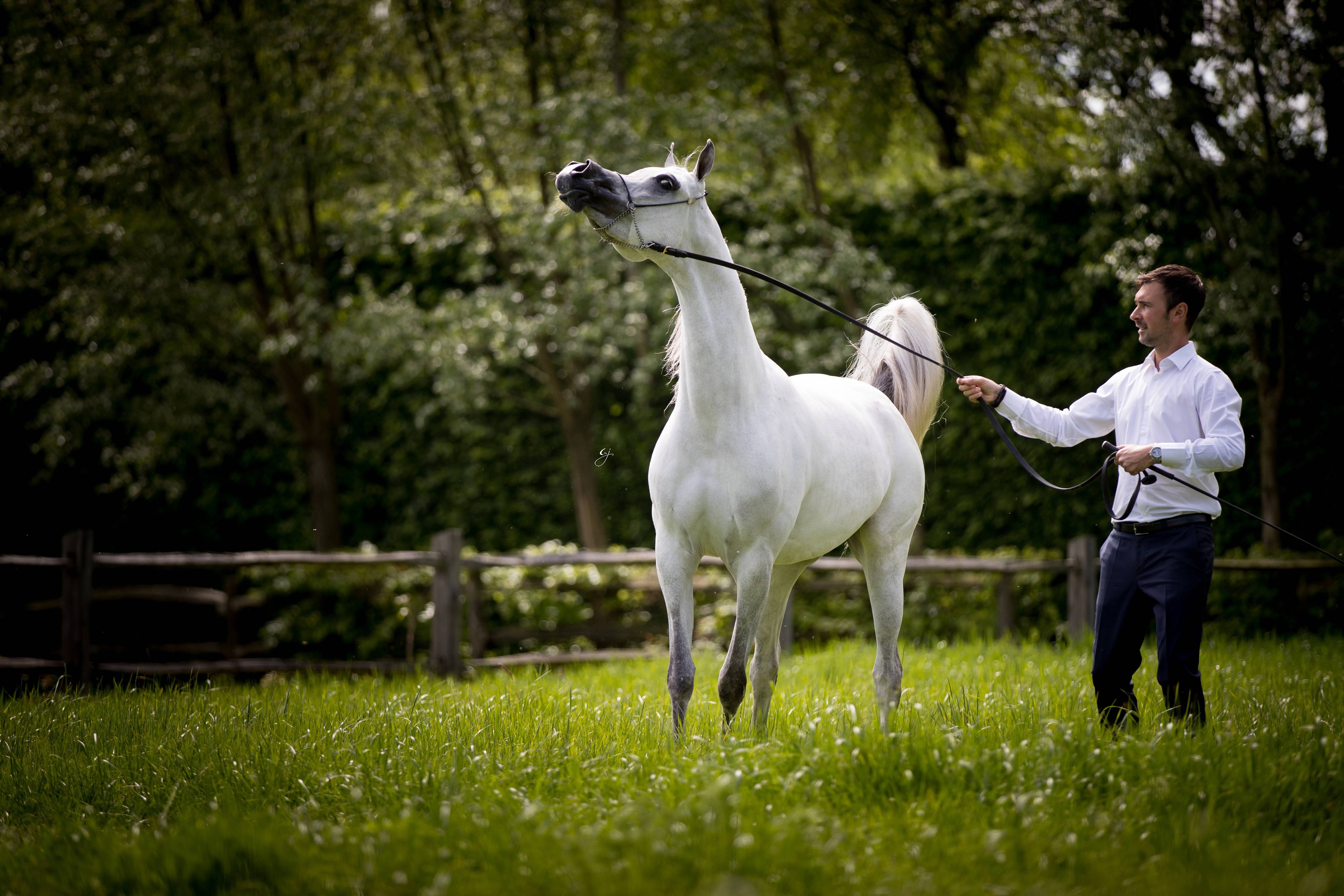 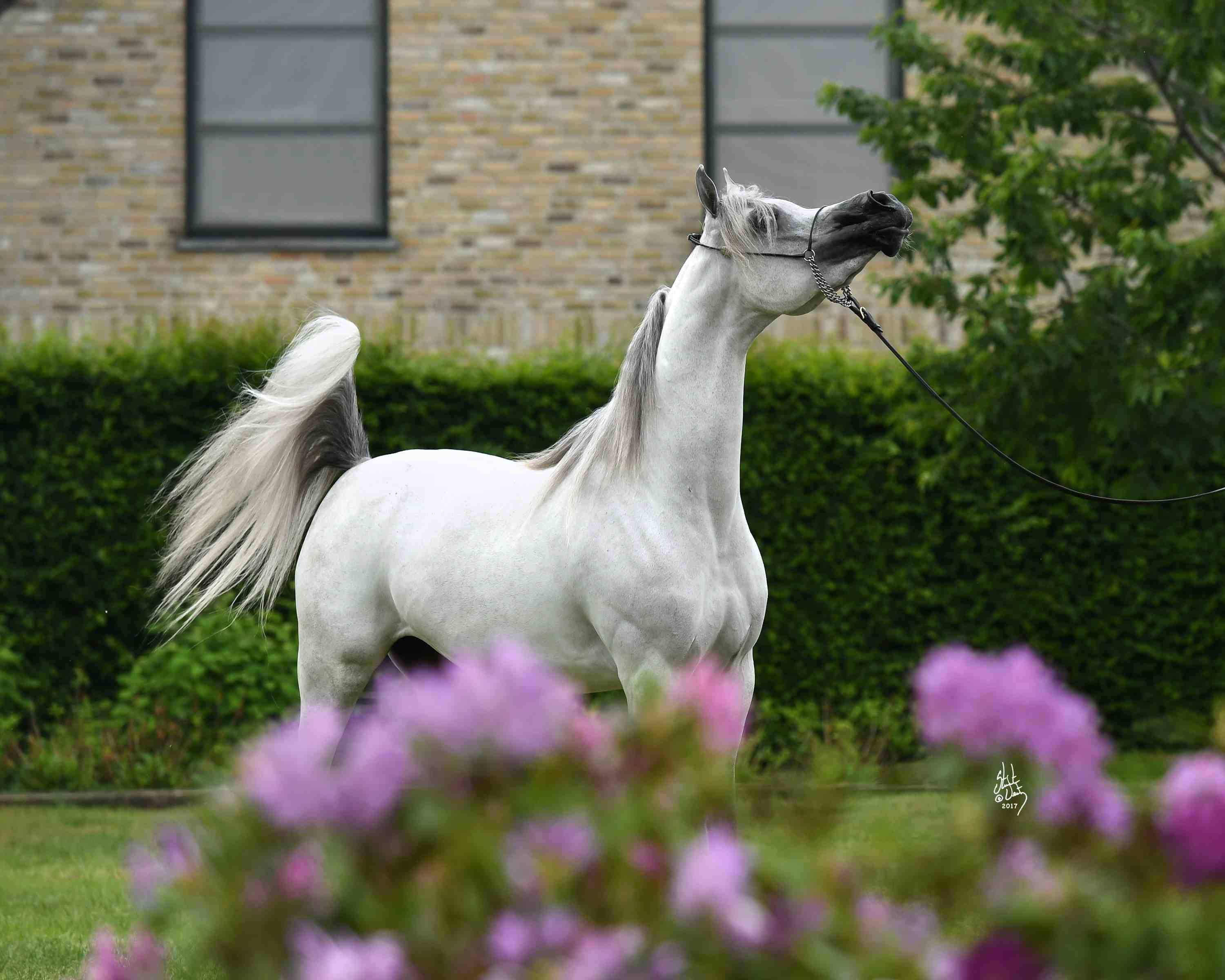 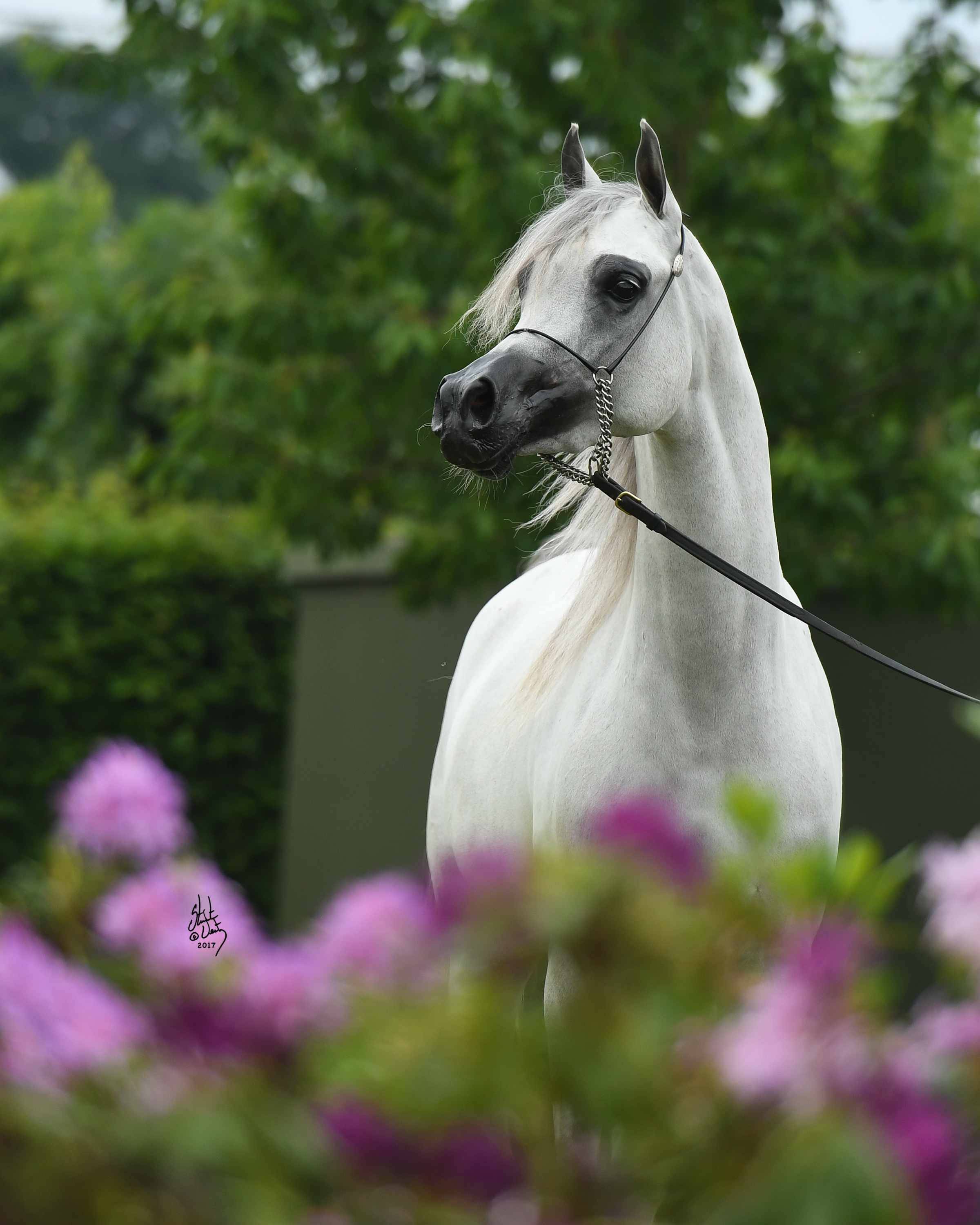 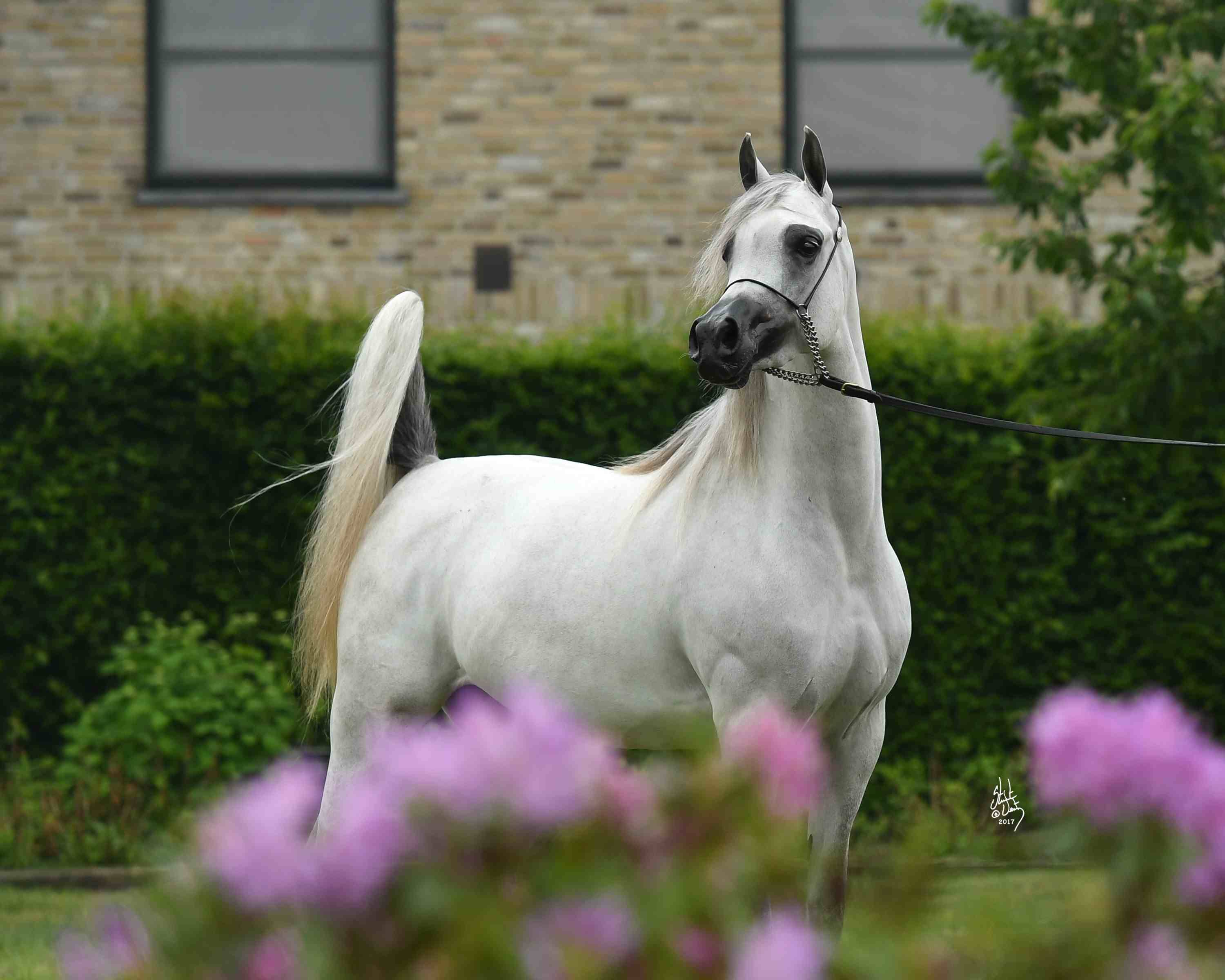 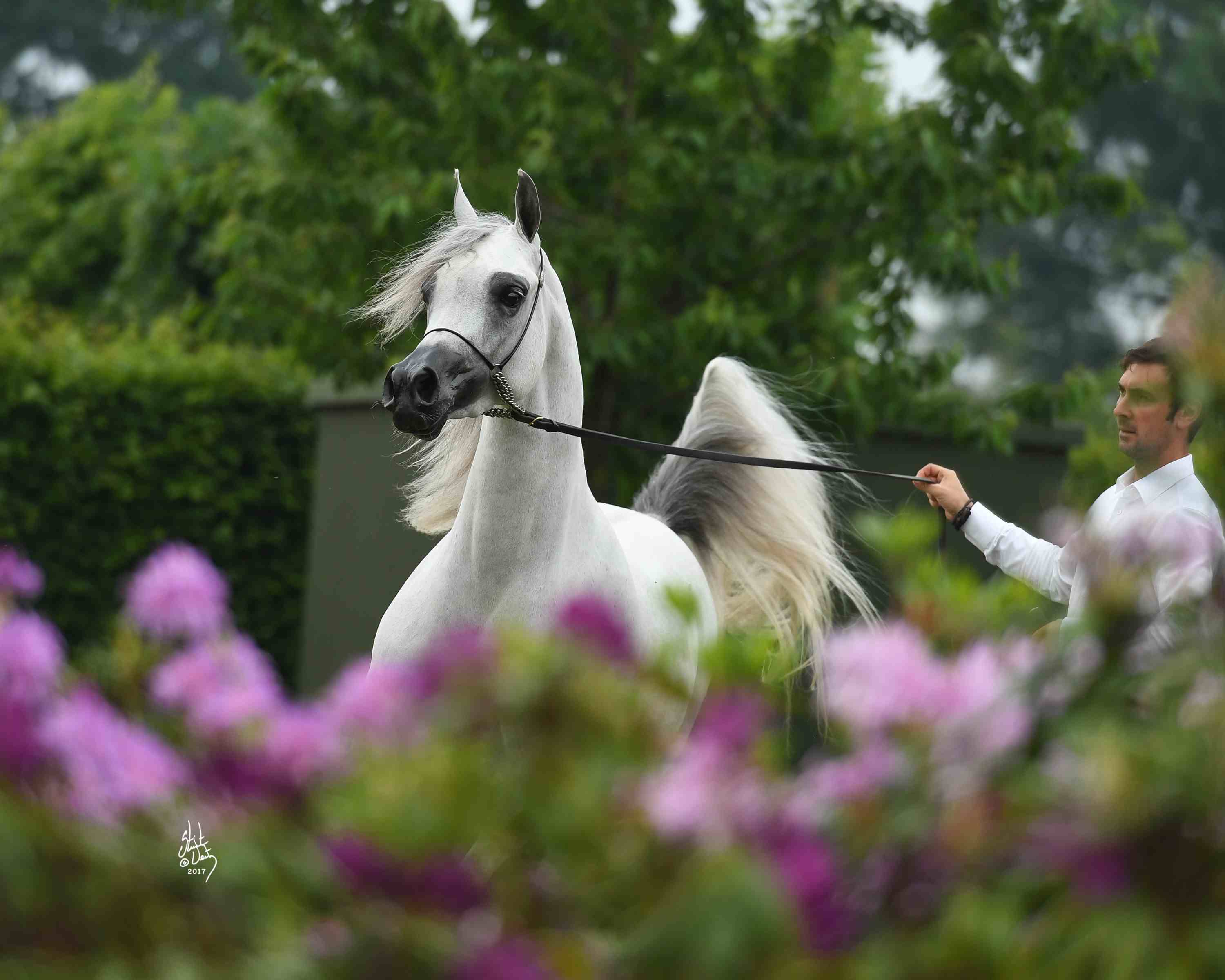 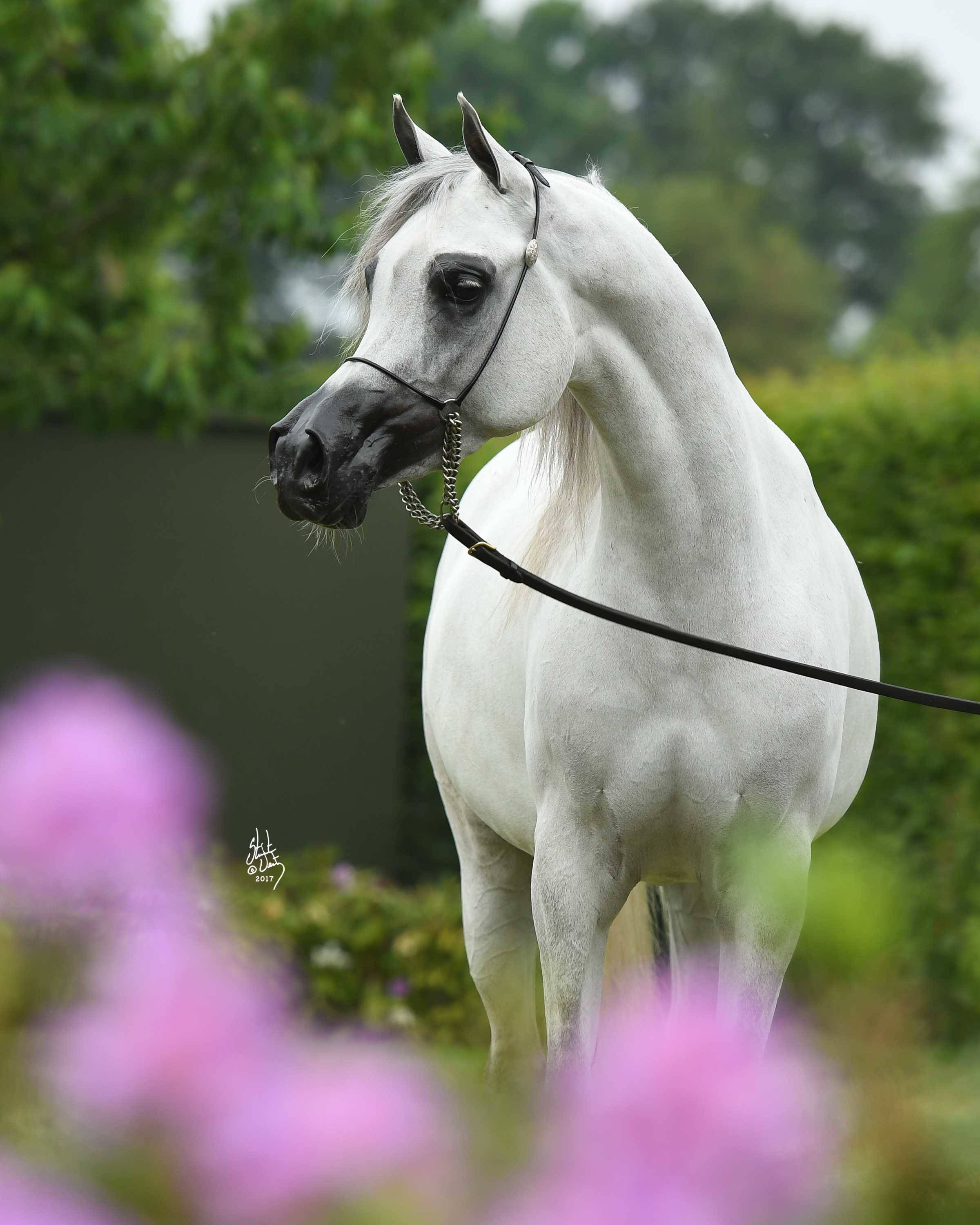 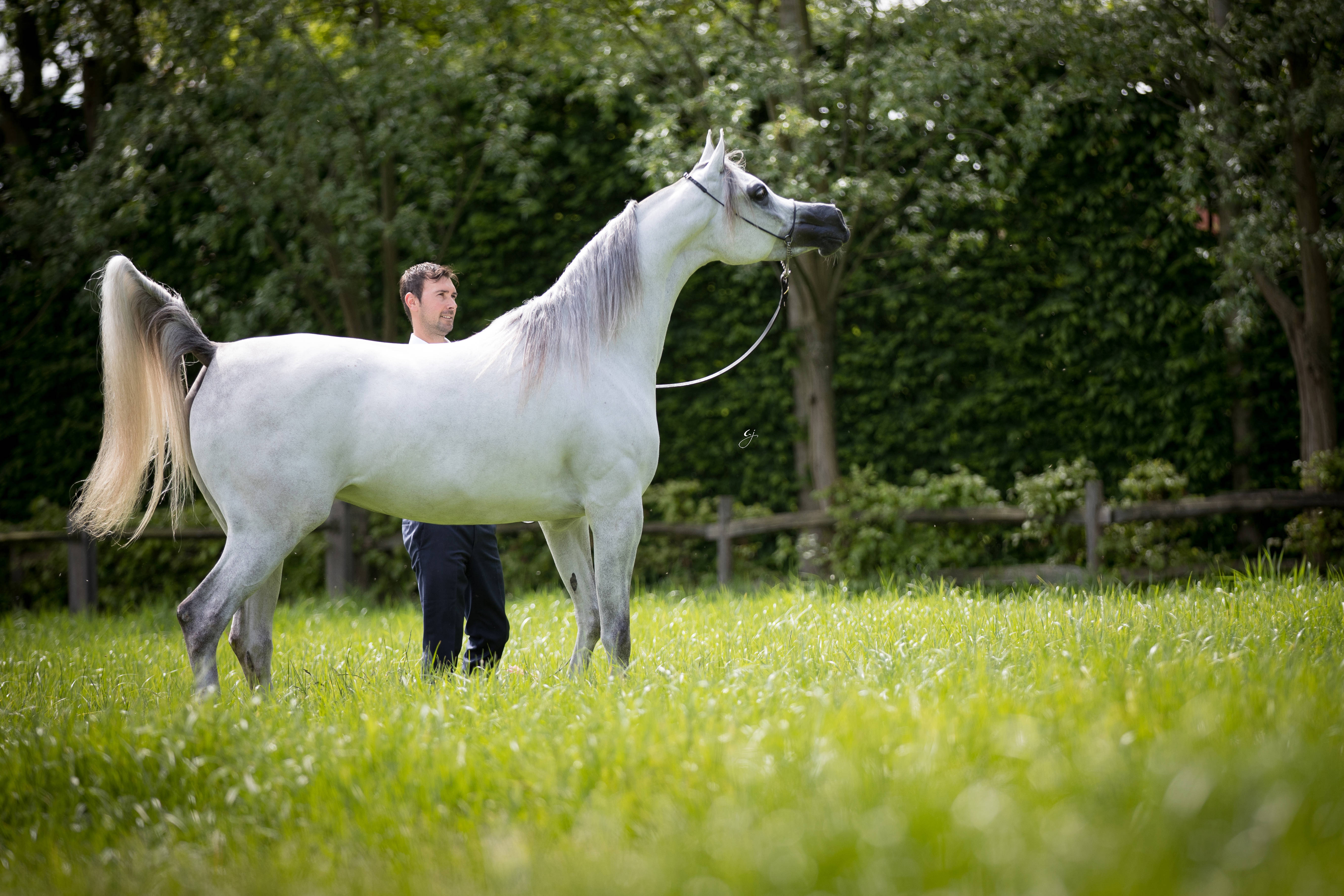 When Sheikh Mohammed Bin Saud Al Qasimi , Albidayer Stud farm manager, Dawn Martin and resident trainer, Barry Shepherd were discussing what was to be the next step in their breeding program, they decided to breed a few of the Albidayer foundation mares to Al Zobair’s S.M.A. Magic One.   They expected to see quality, however, with a seahorse-like face and exotic beauty evident from miles away, one filly truly stood out – Mozn Albidayer (S.M.A. Magic One x Mattaharii by Magnum Chall HVP). The Arabic name Mozn (pronounced Mu-z-n) means raincloud. “A promise is a cloud; fulfillment is rain” is a proverb that was written many years ago, yet it remains so relevant for Mozn.

A pedigree is the backbone to success and serves as a promise to what they may become. Mozn’s is a pedigree where super sires and aristocrats are found in every corner and crevice. She is sired by the sizeable, gorgeous grey stallion S.M.A. Magic One (Psytadel x Majidah Bint Pacha by AS Sinans Pacha. S.M.A. Magic brings something to Mozn’s pedigree that only a few can – the presence of two aristocrat broodmares. The first of these is the Midwest Station I bred and owned Arabian Breeders World Cup Dam of Distinction, Bint Bey Shah (Bey Shah x Musk Angel Eyes by Sir Musk). It is her son Psytadel (x Padrons Psyche), recognized as one of the premier leading sires in Europe, who sired S.M.A. Magic One. It is through S.M.A. Magic One’s dam, Majidah Bint Pacha, that we find two crosses to the second aristocrat; the 1987 World Champion Junior Filly, Saskia RJ (Plakat x Barwna by Iridos). Her son, AS Sinans Pacha, sired Majidah Bint Pacha and her daughter, AS Kharima (grand dam of Majidah Bint Pacha), blessed S.M.A. Magic One with a tail female line to this prolific producer.

S.M.A. Magic One gifted Mozn with size, finesse and charisma among other things, but it is the combination with her dam, US Reserve National Champion Mattaharii (Magnum Chall HVP x Belindaa by Mishaah), that gave Mozn a powerful trot and a sublime look of beauty. Magnum Chall HVP was one of the most successful and revered sons of the leading sire of champions, Magnum Psyche. And it is through Magnum Psyche, that Mozn gets her second cross to the legendary Padrons Psyche. Mattaharii’s dam, Belindaa, is a daughter of U.S. and Canadian National Champion, Mishaah. Belindaa’s dam is Bask Gazal (Bask x Gazal Poquita) and as we all know, the Bask daughters were some of the greatest producers of their time and are a valuable asset to any pedigree.

In the entirety of Mozn’s pedigree, Bask makes an appearance eight times and Aswan a staggering 13 times. These, as well as every other individual in this pedigree, have bestowed countless layers of beauty, type and quality upon Mozn and one can conclude that her pedigree is truly a constellation of some of the most illustrious Arabian stars.

Mozn Albidayer is the fulfillment of all that her pedigree promised - gobsmacking beauty and superstardom. I often refer to Mozn’s show ring stardom as a pathway paved with mostly gold and the occasional silver and bronze bricks. As a yearling, she made her show ring debut at the 2015 Ajman Show where she was named Gold Champion Yearling Filly and achieved the same feat two months later at the Dubai International Arabian Horse Championships. Later that year, she made the journey to Europe and it was at the AHO Breeder’s Championships that she earned her third Gold title of the year. At the All Nations’ Cup, she cast a spell on the crowd (who voted her as Gold Champion) and was awarded the Silver medal. Her final appearance in 2015 was at the prestigious Salon du Cheval in Paris, where she faced some of her toughest competition; it was her enchanting beauty and captivating presence that saw her walk home with the Bronze Champion Yearling Filly title. Barry Shepherd, Albidayer Stud’s resident trainer and handler has been training and preparing Mozn from day one. He perfectly led Mozn to all of her victories in 2015.

In 2016, as a two year old, Mozn set her eyes upon the west and the decision was made to send her to Michael Byatt Arabians to be shown in North America. She made her American debut at Scottsdale and was named Champion 2 Year Old Filly. However, Mozn was determined to quench her thirst for more gold. It was at the Las Vegas World Cup that America, and the rest of the world, saw Mozn’s magic at its finest. Her incontestable performance saw her become the highest scoring female and the Gold Champion Junior Filly. After such a magnanimous feat, Mozn was named Region 14 Champion 2 Year Old Filly and talk was that she was to take on Tulsa. The U.S. National Champion title is the ultimate achievement in North America and when Mozn burst into that arena, all eyes were on her. She set the ring alight and with those ever famous red roses adorned over her shoulders, she walked away 2016 U.S. National Champion Junior Filly.

“Mozn is not the easiest character to be around for she somewhat dictates to everyone around her how SHE thinks the day should go.  And the people in her life have for a large part given way to her thoughts, because they were really strong.  Mozn is such a beautiful horse; it’s hard for me to imagine how she doesn’t win every show, every time.  But again, the people around her enjoyed her beauty so much it never came down to what other people thought as much as what her owner, her manager, her trainers thoughts; she was always enough and more for everyone around her.  Yes, we wanted her to win anytime she entered the arena but she was, and is, so great we were thankful for the chance to be with her and to know her.  Whether she won or not it was still a privilege to be involved,” adds Michael.

Audrey Hepburn once said “Paris is always a good idea” and with a filly of Mozn’s caliber, it certainly is. She once again made her way to Europe to Schoukens Training Center to be shown in Paris. With Tom Schoukens at her side, Mozn’s undeniable femininity, authentic Arabian type and sheer elegance coupled with her powerful trot and tail carriage fit for a war culminated in a spine-chilling display of beauty that saw her end her two-year-old show career as the 2016 World Silver Champion Junior Filly. “I think everybody that comes across Mozn takes a moment to stare at her undeniable beauty. If there is one filly everybody has been talking about in the last 2 years it for sure was her. I had the privilege to show her last year in Paris where she took the Silver medal. She only arrived 3 weeks prior to the show, so we didn’t have a lot of time to truly work with each other. Needless to say, I am really excited to show her again in Europe this year! Mozn is really the type of horse that I like, extremely pretty, elegant, tall with lots of attitude and character. I do hope 2017 will be the year she truly shines, she really deserves that!” said Tom.

Going back to the above mentioned proverb, did Mozn Albidayer, like rain, fulfill all the promises many saw in her? The answer is a huge YES! Genotypically, she has the makings to become an amazing producer and we can be certain that in 2017 Albidayer Stud will capitalize on this. Phenotypically, the proof is in the pudding; like an aging bottle of wine Mozn is blossoming, heightening in quality with each passing year. What Mozn has accomplished in the show ring in a matter of two years is astonishing to say the least. It is without a doubt that we can expect Mozn to continue dazzling crowds and judges alike, adding followers to her global fan base, giving us goosebumps in ‘pasture attire’ or ‘show ring makeup’ and paving her pathway of superstardom with many a golden brick. Michael Byatt said it perfectly: “It is clear that regardless of the fickle nature of horse shows, she will be revered and loved for all the right reasons.  And that her owner will be rewarded not only by her, but that of the future generations that Mozn Albidayer will leave with the Arabian horse community.”